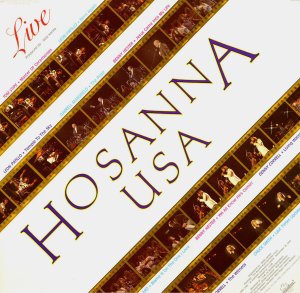 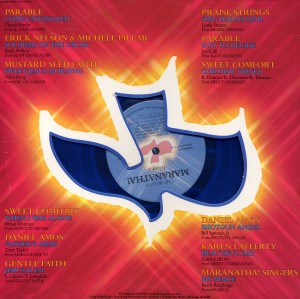 The danger with a list like this is that it proves time is marching on. In under 12 months will be the 40th anniversary of what Life Magazine heralded as the “Christian Woodstock – Explo ’72”. My brother attended that event. I had just graduated from High School, and was about to begin my freshman year of College. So many of the songs selected are going to be memory joggers for many of us who qualify for membership in AARP. Or maybe just call us Jesus Geezers.

The albums shown above were some of the most significant of that very special and Holy Spirit-filled ten year season. Of course Jesus Sound Explosion Explo ’72 had to make the list. Eighty thousand persons were there. Almost a significant is the Hosanna USA Live event. Broadcast live via satellite and simulcast on FM stations (this was before stereo TV audio) as was common with other secular televised concert shows like ABC’s IN Concert series. A very ambitious undertaking by Chuck Smith and the Calvary Chapel/ Marantha Music folks – I had a connection because I was Advertising Manager for Tyndale Bookshops, who sponsored the FM simulcast in the Chicago Market on a non-Christian mega-watt FM station that hit 3 states around that city.

Then there are the Jubilation series “sampler” albums from Myrrh Records. Four sides for $16.98 list price. Ouch! These were some of the first widely distributed albums of Jesus Music made available. For many who didn’t have a progressive Christian radio station like KYMS-FM in Costa Mesa, CA or KCFO-FM in Tulsa, OK , the only way to hear Jesus Music through syndicated shows like Scott Ross, PowerLine or Full Circle with Jerry Bryant and sharing albums like these among friends. Many of the early artists custom LP’s were distributeq by the Sonrise Mercantile Company and available by mail order only like Larry Norman, Children of the Day, Danny Lee & Children of Truth and much of the early Marantha Music LP’s. The big exception was Good News Records, Love Song’s label had distribution through some major national record departments in chain stores like Sears and E.J. Korvettes. I can remember buying the first Love Song album there in Elmhurst IL much to my delight.

As is our policy to feature “songs you just don’t hear on the radio anymore” I’ve selected many significant songs and artists from the above albums that first introduced Jesus Music – plus some very rare live cuts from the 1972 to 1974 vintage that really carry the feeling of the times. Just like Walter Conkrite’s educational series “YOU ARE THERE”, these selections will put you smack dab in the middle of the Jesus Movement. For you newbies who missed it — enjoy. The rest of us can close our eyes because like the man says… “and more sweet memories on SnT Radio”.

1. Tomorrow’s News by Malcom and Alwyn

2. Heaven’s Gonna Be A Blast by Honeytree

4. Think About What Jesus Said by Love Song

7. I See Men As Trees Walkin’ by Johnny Cash

8. The Prince Song by the 2nd Chapter of Acts

10. Friends by Ernie and Debbie Rettino

14. Ain’t You Glad by Michael Omartian

15. Reaching For The Sky by Liberation Suite

17. Light of the World by Parchment

20. Jesus Came Into My Life by Benny Hester

21. Song for Salvation by Paul Clark

22. Temple To The Sky by Leon Patillo

23. To The Ancient Of Days by Bob Ayala

SnT Radio.com will play one song approximately every hour from this list beginning at 12:00am EST Saturday, September 3, 2011.

Please visit our SnT Radio.com LIKE Page on Facebook or tweet us #SnTRadio on Twitter.Tell your friends and refer them here www.sntradioblog.wordpress.com
You are encouraged to join the SnT listener community and make a comment or share your personal Jesus Music era memories.